Hey ya’ll; welcome to the inaugural post on vegan cookin’.

Perhaps you’re asking yourself, “What do vegan recipes have to do with Tarot cards and art?”

Great question. It has pretty much nothing to do with art. But I like to treat Tarot cards as my personal way of spreading joy and compassion with the world at large. I, personally, am not a strict vegan, but I’ve been experimenting with vegan cooking for a handful of years now. Since my site is finally up and running, I’m going to go ahead and start documenting the delicious dishes in which I take pride. Because who doesn’t like delicious food?

Why vegan? Because it’s generally compassionate to not eat cute critters. And also because heart disease totally runs all up in my family, so I’m going to do all I can to head it off at the pass.

The recipe for this sucker comes from the second volume of the excellent Scott Pilgrim comic book. There’s a fair amount of chopping, so it’s definitely not the quickest recipe, but once you revisit it a second (or third) time, you should be able to get a groove going between boiling the potatoes and cooking the veggies that really cuts down on time. You can also double the recipe easily to make a whole bunch of meals out of it, and best of all, the recipe itself is kind of barebones so it’s super easy to make it your own.

So. What will we need? 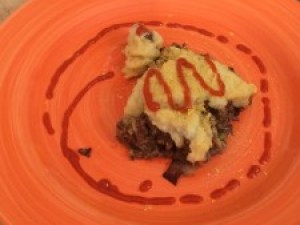 Sri Racha drizzle optional, but I would recommend it.

You can add pretty much anything to the veggies in this recipe. Want peppers in there? Chopped mushrooms? Cooked spinach? Some corn? They’ll all work great as riffs on this recipe.

In the coming weeks, I’ll be cooking up breakfast grub in the form of Heart of Steel Cut Oat Bars (courtesy Bake And Destroy’s recipe) and making my own seitan with a corned beef marinade flavor (courtesy the Chicago Diner cookbook).

And one last plug: If you like this, you owe it to yourself to check out Vegan Vortex this weekend from 11am-4pm. Sure, I’m going to be reading Tarot card readings and selling arty stuff, but you can also find vegan tamales, biscuits and gravy, deep dish pizza, and innumerable other sweet and savory delights.