Fire licks in its wake

Oh, this dream I had 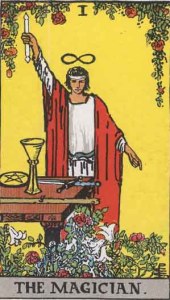 A man dressed in robes performs a ritual. His robes are red and white. Roses above are red; below the flowers are red and white. Red is desire, white a purity of intentions. He wants, but he wants for the best of reasons. The ritual he performs involves the symbols of each of the minor arcana. These minor arcana, as discussed previously, symbolize aspects of life: the physical, the emotional, intellect/speech, and desire/focus.

It is worth noting the wand he is using in his ritual (which I would guess is the Lesser Banishing Ritual of the Pentagram), is actually very similar to the wand wielded by the final card of the major arcana, The World (XXI) although The World has two wands, where the Magician has only one.

The cosmic lemniscate, the infinity symbol, a side-laying figure eight, corresponds to his formation of direction after the first steps on his path, symbolized by The Fool (0). Now he knows what he wants, and he can move forward with that knowledge, corralling the strength of these new tools at his disposal. He is intuitive knowledge, contrasted against the formalized, studied knowledge present in its decimal twin (Justice, XI).

By way of an example, say a querent is considering a life as a writer. The intuitive path would be to keep to a schedule and force themselves to sit and write for an hour each day until they have found their voice. Justice, however, would be taking part in writing programs or some English classes. A similar example would be someone deciding they want to help people with their problems. The Magician might become a Tarot card reader, while Justice might become a licensed therapist or social worker.