I once happened upon a Tarot talk given by somebody who clearly did not know how to read Tarot cards. This particular figure offered a card-by-card walkthrough of the Major Arcana, but I noticed a funny thing halfway through his lecture. He would show a card and, inevitably, give a half-assed non-explanation of any symbolism on the card and then quickly remind everyone that he could “teach an entire 6 hour class on any one of these cards, so it’s better not to get too deep into any one.”

While there’s a certain kind of half-truth to this claim; you almost certainly could offer an entire academic lecture on any one Tarot card and its historical/religious/occultic tradition, it fails to look at the Tarot deck as a single unified entity with user-friendly attributes. It also frames the Tarot as something that cannot be wrestled with unless you’ve spent 6 or so hours drawing every potential hidden meaning from each individual card.

A Tarot deck is immense in the meanings it holds, but it is much more approachable than such people would have you believe.

So here’s a frameworks to start thinking about the Major Arcana.

This first method was first brought to my attention by way of Alejandro Jodorowsky’s The Way of Tarot.

The Major Arcana consist of 22 cards. They are numbered, and they begin and end with bookends of 0(The Fool) and 21 (The World). In between these two cards, we have two cycles of 10, which is why we call it a decimal system. We begin by pairing off the corresponding numbers with the second half of their decimal pairing; 1 is paired with 11, 2 with 12, 3 with 13, and so on.
According to Jodorowsky’s system, they follow this general numerological heuristic:

1 (The Magician) and 11 (Justice) regard undertaking matters of study. 1 is through intuition, where 11 is through “book learning” or intensive formalized study.

2 (The High Priestess) and 12 (The Hanged Man) both concern gestation; the 2 hides the word of God beneath her robes as they sublimate and become a flowing river (Jodorowsky also claims this character is sitting upon an egg waiting for it to hatch), while 12 hangs literally, almost as fruit on the vine waiting to be picked.

3 (Empress) and 13 (Death) are different pursuits to creativity; 3 lets her garden grow freely while 13 slashes and burns, in order to fertilize the ground for future growth.

4 (Emperor) and 14 (Temperance) are both stable; 4 is stable in finance and the physical realm, while 14 is stable in spiritual and emotional matters.

5 (The Hierophant) and 15 (The Devil) both explore paths toward enlightenment; 5 is the right hand path and 15 is the left hand path. This card shows some of the better evidence for the concept of the decimal system. Inspection finds a worshipped figure centered in both cards, his tool of illumination in one hand as his other hand gestures to the worshippers that stand at his call. (See below) 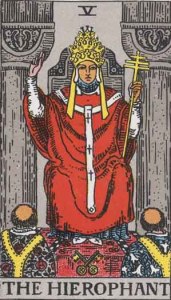 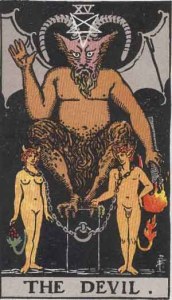 6 (The Lovers) and 16 (The Tower) symbolize the discovery of one’s true self by way of what joins your life (6) versus what is leaving your life (16).

7 (The Chariot) and 17 (The Star) are the steps beyond victories. The steps are differentiated by whether they are external (7) or internal (17).

9 (The Hermit) and 19 (The Sun) are venturing forth into the future on bridges of the unknown; They are different approaches to the idea of having faith in the process. In one card the path is uncertain (9) while the other shows a certainty of one’s path (19)

10 (The Wheel of Fortune) and 20 (Judgment) are feeling as though one is at fate’s whim (10) while 20 is the idea of knowing one’s calling above all else.

While a few are a little harder to find sense in (10 and 20, 4 and 14), enough of these pairings really slap you upside the head with a load of new context.